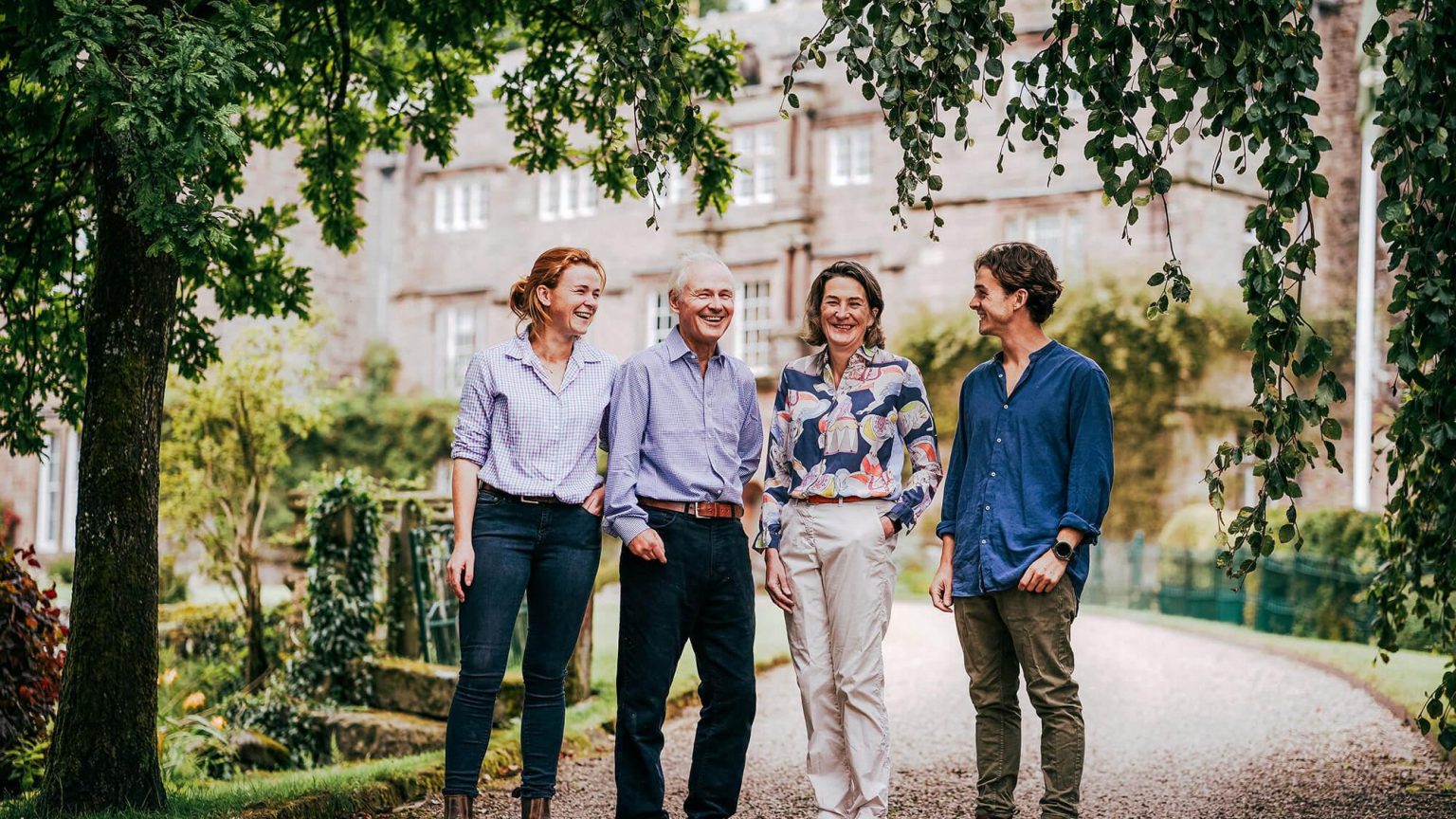 History of the Hall

Browsholme was ‘H’ shaped, having a central hall with the parlour wing to the west and kitchens to the east; by 1591, when an inventory was taken, twenty-four rooms were listed including the ‘Schole Chamber’, ‘Paynted Chamber’ and ‘Maydens Chamber’. After 1603 the front was refaced in rusticated pink sandstone and the central portico added displaying the orders of architecture; Doric, Ionic and Corinthian. A hundred years later the small Queen Anne wing was added to the east. This provided a second staircase, a new kitchen below and a bedroom and closet above.

The final transformation was in the early nineteenth century when Thomas Lister Parker removed the front of the west wing rebuilding on the same ground plan a grand regency drawing room and erected a single storey portrait gallery, now the main dining room.

The Hall, dating back to the original house built after 1507, was once sixty-eight feet long and is arguably the finest surviving antiquarian interior in England. The many and varied antiquities on view include a buff coat as worn by Captain Thomas Whittingham, killed at the Battle of Newbury fighting for the king; the dog stirrup reputedly used as a gauge to control dogs in the Forest of Bowland and safeguard the deer, a skull believed to be a Martyr from the Pilgrimage of Grace, a peg tankard said to have been in use since about the reign of Edward III, medieval stained glass and a fragment of a Zeppelin shot down in 1916 and given to the family as a souvenir.

In 1381, John of Gaunt granted to Edmund de Alkincotes the employ of ‘le Parker’ of Radholme Laund within the deerpark of the Forest of Bowland. The origin of the family tree can be traced back to his grandfather Peter de Alkincotes. Some genealogists go further back to suggest a connection to the descendants of Edward I; but the creation of ‘le Parker’ in the late 14th C is sound foundation for this Parker family tree.

In 1490 or thereabouts, Robert bought the leasehold of the vaccaries of Browsholme and Waddington from the crown and probably built the first dwellings for the family at Over and Nether Browsholme. From this period the family tree has been well documented, certainly for the eldest children of each generation. For the younger members and girls who have married, much less is known. Many of these moved to other parts of the country and to the America’s and beyond.

In 1688 Robert Parker, the second son of Thomas Parker of Browsholme, bought Alkincoats Hall near Colne and founded a distinct branch of the family tree with direct lineage to Robert & Amanda Parker today.

Read about The Parkers of Browsholme (PDF)

Read about the American Link (PDF)

Another important family tree is the antecedents of Col Robert Parker. He died a bachelor in 1975, leaving Browsholme to his 4th cousin and godson Robert the current owner.

William Parker (1560-1631), Archdeacon of Cornwall married, Joan Panchard (m.1589) and they had two sons the elder being James Parker. James Parker (1590-1672) the eldest son of William, married Katherine Buller, of Shillington, Cornwall, on 12th December 1616; Richard was the ninth child and the fourteenth son of this marriage that produced twenty-one children! Richard Parker (1630 Ç1677, the ÄemigrantÅ) emigrated to the Colony of Virginia, arriving in Nasemond County in 1647 it is said due to a price being put on his head by Oliver Cromwell for his support of Charles I and the royalist army

The Library is now most remarkable for its panelling of about 1620; its diagonal pattern is only paralleled locally by the dining room at Towneley Hall, Burnley. The bookcases were originally intended as pew ends for the chapel at Browsholme, dated 1897, but never completed. They were adapted as showcases and contain a variety of antiquities, including a bowl from Ur, a cup from Knossos, bronze age swords, Roman glass and a group of medieval tiles.

The fireplace is flanked by portraits by Arthur Devis, the Preston painter, depicting Edward Parker and his cousin Robert; while Elizabeth Parker, the sister of the former and first cousin of the latter. Elizabeth is well known in Lancastrian history from ‘The Gentleman’s Daughter’ by Amanda Vickery for the profusion of love letters she exchanged with Robert whom she married against her father’s wishes and for diaries which recorded her unhappy second marriage to John Shackleton a drunken wool merchant from Colne.

The Drawing Room is the principal state room of the house, formed when the west wing was rebuilt by Thomas Lister Parker in 1805. Its architect was Jeffry Wyatt, later Sir Jeffry Wyatville (1766-1840). The furniture is mainly Regency, including two curved sofas, chairs by Gillow, and a square piano by Broadwood. There are paintings by the artists James Northcote, Romney, Pompeo Batoni, Angelica Kauffmann and Sir Peter Lely with a fine pastel of Oliver Cromwell.

The Dining Room, with crimson wall hangings, was added in 1807 and served as a gallery for Thomas Lister Parker’s ambitious collection of paintings. A gilt pier table, already in the room in 1819, is English of about 1760, its only parallel being in the Foundling Hospital in London.

The unusual semi-circular wine table, chairs and dining table are all by Gillow. The most distinguished painting, ‘Grouse Shooting in the Forest of Bowland,’ depicting William Assheton of Cuerdale Hall and the Rev. T. H. Dixon Hoste, was painted by James Northcote. A portrait of the last Keeper of the Forest, Robert Shaw, who died in 1807 aged 88 (recently exhibited at the National Portrait Gallery) is another of the thirteen other paintings by Northcote at Browsholme.

The Ante Room contains an overmantel with a carving of the family arms with those of Sunderland, Tempest, Buller, Redmayne and Bouch; these are mirrored by heraldic stained glass of about 1805 by Mr. Wright of Leeds and Mr Harmden of Cambridge.

Remodelled by Thomas Lister Parker in about 1805 the fine carved staircase leads past a remarkable window, a jigsaw of stained glass of various dates from the 13th to the 19th centuries, created from pieces said to have come from Whalley Abbey and Skipwith, York.

The Yellow Room and The Velvet Room

The Yellow Room is richly panelled in oak by Richard Alston, the estate carpenter, who also executed the Tudor-style bed dated 1891. The decoration of the room is dominated by blue and white porcelain, mainly 18th-century Chinese export wares.

The Oak Drawing Room, panelled in about 1700, in a provincial Grinling Gibbons style is, without doubt, the finest room in the house and used daily by the family. In the windows, which provide an excellent view across the park is heraldic stained glass, including the arms of James I. Among the paintings, are a copy of Holbein’s Sir Thomas More and a portrait of an Elizabethan gallant inscribed ‘Only-Death Makes-Captains-Quayle-And-Lusti- Soldiers-For-To-Fayle’.